Antlers. A word that makes any hunter’s ears perk up. For some, antlers are what really drive hunting and inspires hunters to continue the never-ending search for a bigger buck. Since it is June and the off-season for Deer. I thought some information around deer antler growth would best be received at this time.

Since we are in a perfect time to SEE the growth, here are 5 interesting facts you might not have known about deer antler growth. As well as antlers on deer in general. Remember knowledge is power and it can always be helpful to know more about the animal we all love to hunt.

Antlers are made of bone, mostly calcium, phosphorus, magnesium, and other minerals. Although the deer get some of the minerals needed for antler growth from food, a lot of it is taken from the buck’s skeleton. Something that can lead to the develop osteoporosis during the summer. Taking preemptive measures, like setting out large mineral blocks for the bucks, can help negate some of those issues.

If you have ever been curious what the small hairs on a deer’s velvet are, they stick out and make the antlers look bigger than they are. The small hairs act as a kind of radar-like system. Helping them avoid bumping into trees, fence posts, etc., and damage his soft antlers. The hairs are a good indicator when of the antler being in it’s most vulnerable and sensitive state 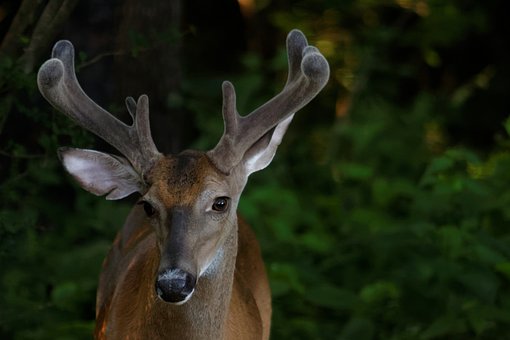 Throughout June and July, velvet antlers have a complex system of blood vessels that causes them to be hot to the touch.  “There is so much blood carrying protein and minerals to a buck’s antlers that even small antlers are easily detected by thermal imaging devices. Tines show up like neon signs when flying over with thermal cameras in summer.”

The time in which antlers begin to show vary depending on the part of the antler that is growing. Typically most of the points on a rack will show by mid-June. The length at this time, however, is almost always less than halfway developed of its mature size. The beam will see an uptake in antler growth in late June or early July.

The majority of bucks will be done growing their antler by the first of august. They then fall into the process of their antlers getting much harder and denser. Something that will usually take around 3 weeks to complete. The antlers will be solid bone when after the outer velvet has come off. But they are not nearly as hard or dense as they will be. From the time they begin growing until mid-July, a buck’s antlers are softer and more malleable. Which makes it easy for a buck to cut or even sever a beam or tine during the growth and hardening process. It is crucial for deer to not cut or injure their antlers too badly. As it can lead to them bleeding out.

If you have ever wondered what the almost liquid-like substance coming off antler horns, it is sebum. A liquid-like secretion that can be found on the hairs gives the velvet a shiny look. Sebum also assists in keeping unwanted bugs away from the deers face.

About the Author: wpengine

This is the "wpengine" admin user that our staff uses to gain access to your admin area to provide support and troubleshooting. It can only be accessed by a button in our secure log that auto generates a password and dumps that password after the staff member has logged in. We have taken extreme measures to ensure that our own user is not going to be misused to harm any of our clients sites.