The Best Ways To Stay Safe In Your Tree Stand

This Blog Post Is an Excerpt From The American Hunting Podcast Episode 001: You Can Find The Whole Conversation Here

I get to work. I sit down. First thing I get is a Google alert of a hunter that’s died. And this time in Ohio, we had one hunter die on the fifteenth of October is the first one I think we know of in Louisiana Wednesday, the twenty fourth of October. A Guy dies. I guess he was forty eight years old. He is in Ohio, goes hunting alone, doesn’t come home. Wife sends the police out, obviously to look for him. And they found him at the base of a tree and they look up and his lock on stand had collapsed and allegedly or apparently, he had fallen thirty feet and died right there. So I mean, can we talk about this stuff all the time, and I’m really kind of over it, you know? I mean, you know, it’s one of those things where the last few years, your involvement with the Tree Stand Safety Awareness Foundation obviously is a big part of this, too. But we have this conversation more than we have to have this conversation, and we had a thing where we were talking about and we said, don’t be a statistic, you know, Go home, be a father, be a son, be a grandfather. I just I can’t imagine my brother going hunting and I get a phone call saying he’s not coming home. That’s insane to me and it happens every year. It’s really ridiculous. I said a minute ago I was over it. I don’t mean, I’m over like I’m moving on. I mean, I’m tired of having this conversation. When it’s so preventable, you know? And we don’t have a lifeline here in the office, to display. They’re in our trees. Exactly. We’re using them. 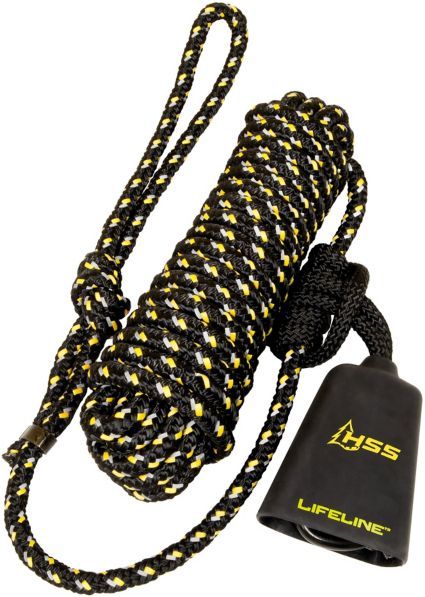 This is a tree rope that goes just around the tree, and we’re taking these off of all of our trees and putting lifelines on. If people don’t know what a lifeline is, this is a rope. You know, it’s a high quality climbing grade rope. It goes around the tree and then there’s a prusik knot on it. That prusik knot actually keeps you in your stand. You can’t fall. These were invaluable for years. And then, just a few years ago, I was introduced to a lifeline. Now they’ve become kind of mainstream, but it’s basically the exact same thing. It just goes all the way to the ground, and then you tie it off at the bottom of the ground and that knot slides from the ground up to the tree, standing back down with you, you’re literally connected the whole time. But you can’t fall. My foot doesn’t even touch a ladder unless I’m connected. I just don’t understand. I know it seems maybe a little extreme, but it’s just not worth the risk.

As much as we love going out hunting and hanging stands and shooting deer and doing all these different things, it’s not worth dying over. You know what I mean? Oh, you know that’s the thing is we’re not talking about you broke both your legs. We’re not talking about a lengthy hospital stay or even if you’re in a wheelchair the rest your life, you’re dying. You’re not coming home. You’re not going home. Somebody has to have a conversation with your kids and explain to them what happened and that kind of all ties together. You know, there’s been a slight decline in hunters over the last four, five years, and we won’t go all into that on this episode. But you know, when mom has to tell the two kids Hey, Dad had an accident and, you know he’s not coming home and he died out there. I’m going to guess they don’t hunt. They’re probably done. You know, Hopefully not. Surely they’re probably done for a while. I didn’t know this man or his family so I’m not speaking for him. But come on, man. I mean, use lifelines, use harnesses. And this guy’s forty eight. This man, the guy that died in Louisiana, was thirty three. These are mentors to somebody. They’re showing somebody else how to hunt and everything involved. If you’re not showing kids young people or even adults, how to stay safe then just don’t even show up because you’re not doing any of us any favors, if you’re not telling them how to be as safe as possible, you know funny because I’ve only been deer hunting this my third season. I’ve never been exposed to hunting without a lifeline, without a harness And maybe I’m lucky in that way hunting with Sean. I just don’t know any different. So even the thought of getting into a tree stand with nothing on it, just even thinking about it makes me just a little nervous. So, you know, it’s a habit for a lot of guys, and we understand that. And we see conversations on Facebook pages and groups and things and guys just they’re in the habit of not wearing one and you’ve have to break it. You know, guys say it’s too expensive. They say it’s inconvenient. Dying is expensive. It’ll destroy your family. You know that?

My favorite point is they’re too restrictive. Dude, you’re standing on a two foot by two foot metal platform in the middle of a tree. You’re restricting yourself already, right? You know, there’s nothing restrictive about it, but it’s an evolution. You know, when I first started hunting, I had a way to with, basically was to waist belt. Still, waist belt goes around my waist, There’s a little tag on it, and then the other belt goes around the tree. And then that’s just it, you know? And I was being safe. There were people, like while you were in that well, because I don’t fall out of a tree. Well, they found out that if you did fall, you actually invert and you hang there until you die, not the best, allegedly, you know, But I never felt I was being safe as I could be. And then, you know, obviously that went to the harnesses. Now it’s kind of lifelines. The stands are safer. You know, Tree Stand Manufacture’s Association does everything they can do to make sure that the stands themselves are safer. But even it continues to evolve because now we’re seeing box blinds. Now, guys, they’d rather hunt out of the box blind, and they’re even bow hunting out of box blinds. So, you know, I don’t know where it’ll stop. I love sitting in a tree when I can’t climb a tree and sit in a tree, maybe I’ll get in box blinds, but until then, you know, harness, lifeline, stay connected.

You know, ultimately, with us starting this podcast, we were excited about this yesterday. We knew today was going to be the first day we were shooting this thing and having a conversation. Conversations we’ve been having for years. And we decided to turn a camera on and microphone on, walking in this morning and getting you got a notification from TSSA about another guy that died. It makes this whole thing… It dampens the enjoyment just a little bit, knowing that because we were hunting yesterday, you know that if we weren’t wearing that stuff, that could have been one of us. Coming in to work, being in the hunting industry and having to hear these things and have these conversations, it’s not fun. And it’s just hard because you can connect with people sharing a passion of hunting. Just imagine that being the reason you die is because you weren’t being safe, it resonates with me personally. So you know, it is important to have these conversations. And this is wasn’t the direction I thought we’d be talking about this morning.

How Many Acres Are You Insuring?
Please Select a State
Total$
Get Covered Here

Coverage Limits - What Your Hunters and Landowners Receive